The Nature of Things

Posted on February 16, 2015 by findingpegasus

At the end of my last post I posed the question: “How do we show up (for our horse) in a way that allows us to be the leader of our herd of two?” The question referred to the importance of the relationship between our horse and ourselves, and so as you can imagine, how we interact with them has everything to do with our reply. Or, we could simply use the next and last bullet point included in our list of permaculture design principles which, as it turns out, is the same “answer” that Tom used to use on an infinite number of occasions:

While the phrase “it depends” makes it impossible to give a definitive response to the question, I’d like to offer some examples using case scenarios. But in the end, how we go about unraveling whatever knotty circumstance we find ourselves in is what each of us must learn if we are to find the most appropriate response to any given situation. Since we all tend to become habituated to our way of perceiving our horse and our situation, I have enjoyed drawing parallels between similar ideas couched in unfamiliar covers as a way of reinterpreting old concerns and thereby seeing things in a new light. And so, allow me to assert that most of the answers to our question can just as well be found in a garden. 😀 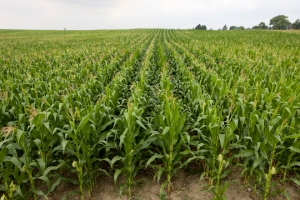 As it turns out, modern industrial farming and common horse training practices have some things in common. Both tend toward reaping high yields quickly and efficiently by using a formulaic approach. A grower will use a “recipe” for fertilizing soil, sowing seed, and spraying pesticides and herbicides on his crop in order to reap row upon row of corn, for example, in acres of nothing but

In the natural world, life is by nature complex and generated by the interactions between species. What one plant lacks, another can provide, so left to their own devices, plants never isolate themselves from other types of plants. Instead they seek communities, forming symbiotic relationships in order to improve their living conditions.  These complementary species mutually assist each other in creating mulch, providing shade and water storage, establishing a nutrient exchange, attracting pollinators and predators that provide pest control, and more. (Click here to watch a really cool documentary on plant behavior). Astute gardeners and small-farm growers will often employ these plant communities or “guilds” to make their work easier and their food more nutrient-rich.

“The Three Sisters” is the name given to the guild of corn, beans and squash, intentionally planted here alongside a few other species without creating “neat” rows. The idea is to mimic nature, which has already evolved over millions of years to come up with the most resilient means for sustaining and regenerating life as we know it.

The Native American triad of corn, beans and squash is one such guild. The cornstalks form a trellis for the bean vines to climb while the beans draw nitrogen from the air, convert- ing it into a plant-available form. These nitrogen-fixing bacteria are fed by special sugars emitting from the corn roots, and the broad-leaved squash shade the ground, inhibiting weeds and keeping the soil cool and moist. Together these three plant species produce more food with a higher nutrient and calorie yield using less water and fertilizer than any one of these three crops in isolation.

Sometimes doing nothing with our horse is the best way to help them learn. Learning is a process that goes on 24/7. So while we appear to be doing nothing, they’re learning patience, the ability to wait without fuss, and how to be relaxed inside their own skin. (Note to self: we get to watch that process taking place first hand, the result of which is… TA DA! …we learn something, too).

Focusing on the quality of a plant’s life means focusing on what will benefit the plant itself, not its yield. And yet, doing so is the very thing that allows that plant to produce a more robust yield. It takes more time and effort up front to establish the environment within which plants can thrive before enabling those species to sustain themselves, and thereby the cultivator as well. The same mind-set is required when working with a horse destined to be more than a servant. So we might ask ourselves what kinds of relationships our horse has — with us, yes, but within themselves, their environment, and with each other. 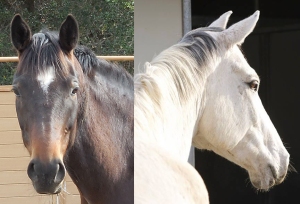 Take pasture mates Zoe and Donia, for example. Zoe is a nine-year-old mare with a history of abusive handling, some of which has been talked about on this blog. It has taken more than two years to undo her negative associations with people and reveal her underlying sweet temper. She is now reasonably good to handle and ride for a variety of people on a fairly consistent basis.

Donia is a 3-year-old filly who has always had good handling from people who had only her best interests at heart. Pasturing them together has revealed some interest- ing dynamics. Although each mare is on the dominant side, Zoe is a little more so and likes to push Donia around a bit. As a result, where a handler once had trouble convinc- ing Donia to take direction, Zoe has taught her that going along with whomever is taking charge makes life a lot easier, a lesson she can now transfer to people.

Zoe pushing Donia on from behind, just because she can…

In addition, having two horses in one pasture means that every time one is taken out to be handled the other is left alone. At first this created quite a bit of separation anxiety in Donia. Every time Zoe left, Donia would gallop wildly up and down the hills, whinnying hysterically and often working herself up into a lather. This went on for two months, and just last week she figured it out. When I haltered

Donia is hesitant when asked to roll on the line, but of course her people would urge her to try. 😉

Zoe and led her away, Donia milled around some, looking a little lost, but she did not get worked up. When we returned a couple of hours later, she was cool and dry and calmly eating. Again, in this particular case, doing less allowed more to be accomplished. Where some people would have fretted to see her carry on, interfering would not have allowed her to learn what will now serve her and her people for the rest of her life.

Even with good handling, Donia was suspicious of a person getting on her back when brought up to the mounting block the first few times. By being observant, her trainer, Sarah Sheehy, saw an opportunity to assuage that fear when she saw Donia resting in her pasture one morning. If we’re straining to rectify a problem in a preconceived way, we’ll miss these golden moments being handed to us on a silver platter.

Helping a horse through separation anxiety can also be accomplished in other ways which can and should be employed, particularly in cases where a person does not have the facilities to let things be worked out on their own. For Donia, her relationships with people were just as important in allowing her to find the kind of support and reassurance that would allow her to generate an inner sense of security. But where the environment and other relationships can do the work for you, it can be a great advantage to let them.

Is there risk of injury by allowing a horse to live in pasture? Of course, just as there is a risk of a horse getting cast in a stall or its legs through the bars of a pipe paddock every time they get down to roll. In my personal experience, there is no place that does not manufacture risk where horses are concerned, but being practically minded and understanding their nature can minimize our anxiety and the likelihood of manifesting something unfortunate.

Preparing a horse to mount is all about the relationship. Here Sarah invites Donia to join her for a good rub. Who wouldn’t want to sidle up to the mounting block after that?

With Zoe, the relationship with Donia has been more subtle but no less profound. Having another horse to interact with has given her a “job” (yes, in her eyes bossing Donia around is her job 😉 ), increasing her sense of place and thereby her self-confidence.

Improved relationships with people allows Zoe to offer herself as a partner her owner, Romy, can begin to trust.

In turn, her demeanor around people has softened as well and her overall expression is more relaxed. Paying attention to and actively engaging ourselves in these types of advancements is what it takes to build a good foundation — and is ultimately what requires the most time and patience. But being interested in establishing a good rapport and mutual respect with our horse before asking for specific movements or exacting steps is key to allowing them to be happy and confident in whatever tasks we put them to later on.

Like people, a horse’s natural temperament combined with their history makes them a complex mentality with a unique set of physical attributes all wrapped into one. Combine that with our learning curve in understanding each horse’s particular make-up, which also depends on our temperament and set of experiences. Even if we have the skill to climb on a horse’s back

for the first time within 30 minutes, what transpires between us and that horse over the long run will be more revealing than anything else.

While Donia has less history to undo, she, like Zoe, has a dominant personality combined with great sensitivity. This translates into her having a strong will while at the same time having the potential to be easily over-faced. She is also a warmblood from a slow-growing line and will not mature until age six or seven. So while she will not require nearly the same volume or intensity of time that was spent with Zoe in

overcoming her past, she will require a similar length of time simply to grow and develop physically before being asked to do anything that would prematurely demand more strength and coordination than she can manage without strain. This does not mean that she is not being challenged to respond to a person in ways that are unfamiliar. It means that she will not be asked to choose between the wants of the person and her own sense of self-preservation, or that which causes her to feel habitually defensive, reactive, or tense.

The naturally willing nature of horses, if cultivated and preserved through establishing good partnerships, will remain a reliable benefit to the human throughout the life-span of that horse. What is a year or two at the beginning to ensure a happy and working relationship that produces a high-quality yield for many more to come?

Author of 'Finding Pegasus'
View all posts by findingpegasus →
Image | This entry was posted in Uncategorized. Bookmark the permalink.

2 Responses to The Nature of Things